To save the turtles and back again

One week of doing Good, and smelling Bad 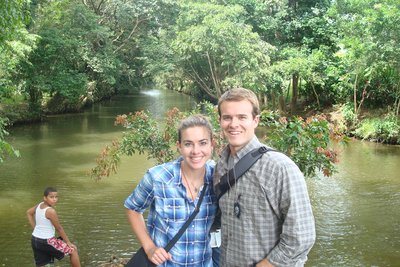 We are back in civilization and excited to update you all on the adventurous week we had! So, we thought we knew what we were getting into with this whole turtle conservation project but I (Kate) was not quite so ready to be literally in the jungle in a very remote and practically inaccessible (only by a 25 minute speed boat ride) part of the caribbean coast. The project site is on a sandbar known by the locals as Isla Pacuare just north of the mouth of the Rio Pacuare.

Just to give you an idea of our first impressions of the place...we arrived by boat where were greeted at the dock by a half dozen dogs and all the other volunteers who had been there from anywhere between 4 days to 9 months. Everyone had a slightly dazed and vacant smile and we couldnt help but begin to make comparisons to Lost and the Dharma Initiave..it felt like we were arriving at the Other´s camp when they were pretending to be roughing it except these people were not pretending...(sorry for the Lost analogy for those who didnt watch it..there may be more to come). Anyway, we started with a safety talk that began with a briefing about what to expect and life at the project...dangers included scorpions, giant spiders, the most poisonous type of snake in costa rica, giant crabs, poisonous toads, bull sharks in the water near the river mouth, and, of course, the infamous current and vicious rip tides. Kate´s reaction - #$%@!!!! Then they told us how they had not had rain for 2 weeks and we would need to fill buckets up in the canal in order to flush the toilets and to watch out for crocodiles...mind you all this was relayed to us by the project lead who kept a completely straight face throughout the entire "indoctrination" process. We both searched her face for some hint that she was just kidding about all of this or at least some of this...and got nothing. Needless to say, we walked out of this welcome meeting and I was pleading with Tim to leave...only problem was there was literally no way to do so because the boat only came and went on Mondays and Thursdays.

We spent the next hours settling in, meeting the other volunteers (about 10 total), and Tim trying to keep my spirits up by telling me that I was brave and could do this and that he would protect me from all the spiders...then I saw the spiders and wanted to cry. My first day was not my best, I was literally tip toeing around the place trying to avoid webs, crabs, and frogs which there were plenty of. Luckily, we actually never saw a snake or a scorpion. The other volunteers quickly understood I was not kidding about my fear of spiders and helpfully pointed out all the webs of the giant Golden Orb spiders who they said never left those webs and were also not poisonous so there was nothing to worry about...but that their bites did hurt like hell.

The first night we didnt do any work..biggest task was just falling asleep on a bed that was permanently damp from the humidity and reaked of mildew, but our second night Tim had a shift in the hatchery with a long-term volunteer Marlena from Germany from 10pm-2am and I was from 2am-6am with Tim W from England. Both of thse volunteers were long-term and endearlingly excited about the bugs, eggs, turtles, crabs, everything. The duties at the hatchery (or "The Hatch" as we began to know it) included checking the 40+ turtle nests that the project had for flies, maggots, ants, and anything else that could infect the nests, and then cleaning them out if we found anything. It was not so bad, but kept you busy.

Over the next days and nights, in addition to "Hatch" duty and other assignments, we patrolled at night with the local Tico guides - most of whom were former poachers themselves. These patrols generally followed the pattern of waking up to the alarm in the middle of the night, groggily tiptoeing past the crabs and poisonous frogs, and meeting up with one of the local guides to begin a moon-lit march 7K up the coastline before turning back for home. It was a bizarre but educational experience to get up in the middle of the night to walk 14 km in the dark of night with a local man who spoke no English and smelled of a mix of marijuana and cologne. It was definitely good that we spoke some Spanish. Don´t get me wrong, the guides were nice and very respectful of the fact that I am a married woman there with my husband. The somewhat intimidating part was passing the poachers (hueveros (direct translation - eggers)) on the beach. There was a very strict no confrontation policy which we thought indicated that it was a very amicable relationship between poachers and conservationists, but in reality, the rule had to exist because as we were told most of the poachers were addicted to crack and carrying machetes and it would be very dangerous to talk to them and start something because there were way more of them on the beach than there were of us....again, sweet.

Luckily, the first night was the only patrol Tim and I did separately, after that, we were assigned to the same time slot and guide. The patrols consisted of walking the beach simply looking for turtles who had emerged from the water to lay their eggs. We saw many tracks of turtles that were either dragged off by poachers or some that just returned to the sea without laying their eggs (usually because something spooked them or they couldn´t find a good spot). On Tuesday night Tim and I had the 9pm - 1am patrol shift. At 10:20pm we actually spotted a turtle coming out of the water, it was amazing! She was massive! She slowly made her way up the beach toward the brush line and we saw a poacher in the distance (luckily we had dibs because we were closer). We got closer to her, but made sure to stay out of her line of sight or she would have just started to return to the water without nesting. We sat with her for over an hour before she finished selecting her spot and digging the nest, and then she began to lay her eggs. The guide used a giant plastic bag that he placed inside the dug up sand and catches the eggs as she lays them. She laid 130 eggs!!! This is a lot! She was also huge for a green turtle (just the shell was 116cm x 105 cm). Another patrol shift came along and carried the eggs for us the 5 km back to the hatchery while we stayed and waited for the mama turtle to go back to the sea. This whole time the poacher stood in the distance and would have killed her if we left her alone. It was really exciting and fulfilling to witness this act of nature.

I am so grateful to Tim for putting up with my yelps, clinging to his shirt, whining about my rank bed, and making him escort me to the outdoor bathrooms in the middle of the night. It was a very challenging week, but we are very happy we did it! Now we are ready to explore the rest of Costa Rica! Tomorrow we go river rafting on the Rio Pacuare and then get dropped off in La Fortuna (Arenal) to hang out in the hot springs and go on a tour to the Arenal Volcano.

Sorry this update was so long...we will try to keep future ones more succinct! 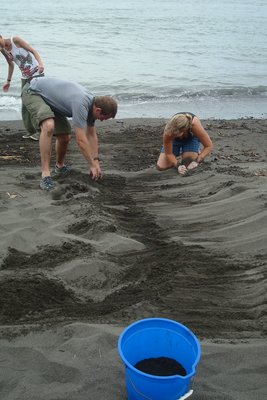 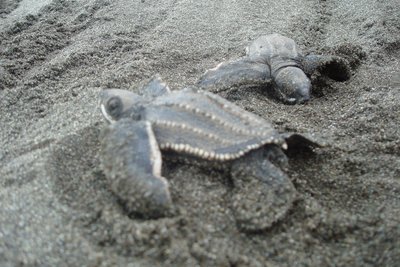 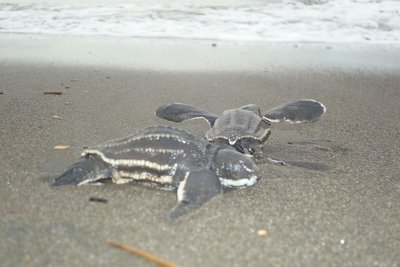 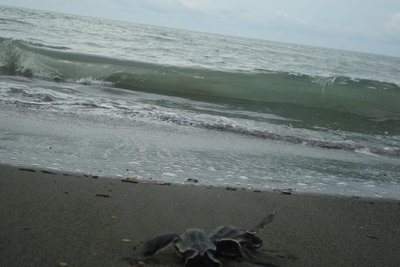 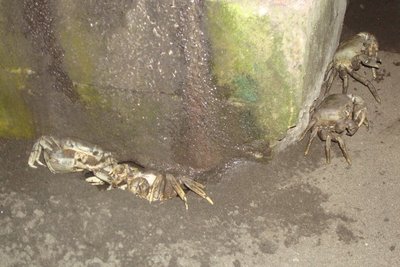 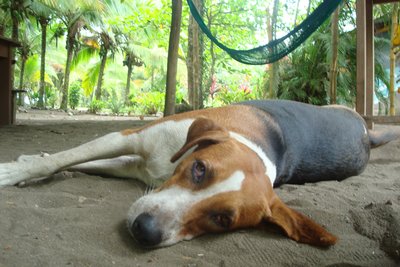 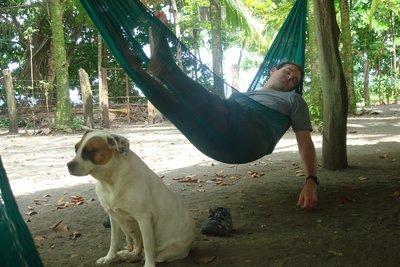 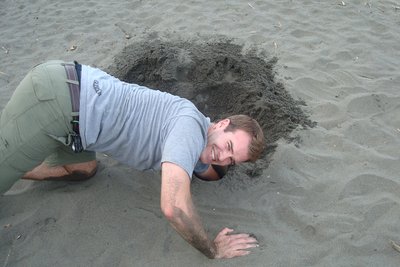 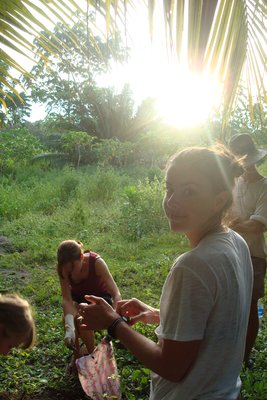 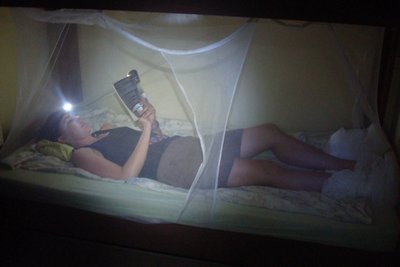 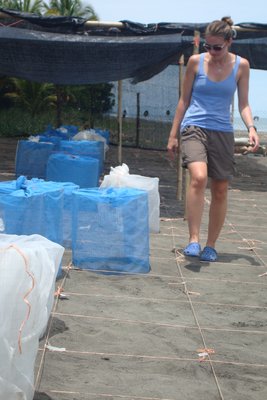 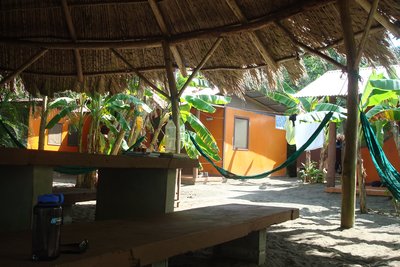 Previous Next Table of contents

You've done good and I'm so proud of you. And I am so glad it's you and not me. I howled reading your review of the adventure and probably would have bawled had it been me. The very thought of some of the critters you mentioned makes me shudder. "Lost" sounds like a walk in the park in comparison. Crack, crocodiles and machetes? Are you kidding!?! If the volcano erupts I doubt you'd be fazed after last week.

Forget "Lost"..."The Invasion of the Body Snatchers" meets my fear level better. Next week should be tame. The Marriott sounds really nice to me. "Los Suenos" looks like my kind of roughing it!

Kate - You are such a great writer, keep it up and you will have the beginnings of a bestseller.
I can't wait for the next post. I'll be living vicariously through the two of you for the next few months.
Lots of love,
Hilary

Amazing Race, Survivor, Lost....they are sitcoms compared to you guys. Glad you have a brief respite coming up soon. You deserve it. Great writing, Kate. love you!

Hi guys!! I am so proud of you, extremely impressed with your adventure so far, and definitely jealous! Love, love love the update, and can't wait to hear about the next leg of your journey. Keep up the positive attitude and HAVE FUN!!!!!!!!!!!!!!!!!
xoxo, Nielson

Hahaha I can just imagine your reactions Kate. Sounds like a very intense adventure. I especially love the pic of your flashlight headband. Muchos abrazos.

This blog requires you to be a logged in member of Travellerspoint to place comments.

If you aren't a member of Travellerspoint yet, you can join for free.